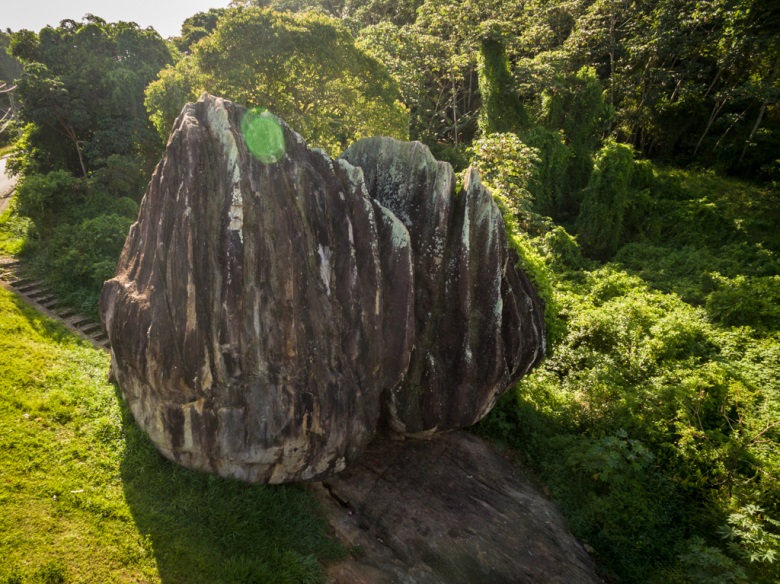 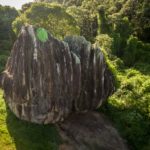 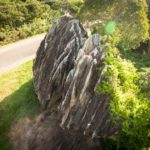 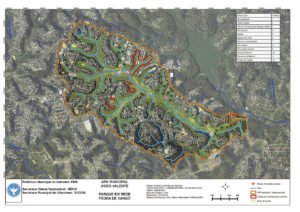 Shango Stone is a geological outcrop dating billions of years and is now recognized as the Greater Salvador’s cultural, geological and environmental heritage. It is located at the Assis Valente Valley Av – the main area connecting the neighbourhoods of Cajazeiras X, Fazenda Grande I, Fazenda Grande II, Boca da Mata and Estrada Velha do Aeroporto. The area is covered by remains of the rain forest and is home to traditional quilombola and native American communities, as well as to African and Afro-Brazilian deities.

Pedra de Xangô (Shango’s Stone) is a cultural, geological, symbolic and mythical heritage of the city of Salvador, Bahia. The name Xango bears in itself multiple meanings and correlates in the Ketu, Angola and Jeje cultures, besides other names by which the rock is known. The reference in the texts to the expression “Pedra de Xangô does not presume of any superiority of the Yoruba culture (nagocentrism), but rather to the frequency with which this monument is better known. So, every time we call it by the name Pedra de Xangô, we should remind ourselves that it can also be called Nzazi Sogbo, Pedra do Buraco do Tatu (Armadillo Hole Stone), Pedra da Onça (The Jaguar Stone) and Pedra do Ramalho (The Wreath Stone), in a clear manifestation of the consciousness of belonging people from the Ketu, the Angola, the Jeje and a a number of other cultures nourish towards the Stone (Silva, 2017).

Geological site of cultural importance where innumerous liturgical rites are performed originated from religions of African matrix, mainly the Orixá Xangô party being considered a sacred place for the traditional communities of Candomblé that inhabits in the adjacent areas. In this place outcrop a Gneissic rock with subvertical foliation geared toward N90° constituted of two residual blocks and a lage.

On the side walls of the blocks dissolution flutes occurs apparently in the same direction of the underlying rocks. On the lage surface there is a fracture, probably a relieve fracture, with N100° orientation, with a N120° inflection on the most prominent fracture, what supposedly conditioned the blocks separation.

The site is inserted into a dissected in hills of convex tops, presenting characteristic morphology of “seas of hills” with thick covering mantle (regolith > 25 m). The residual blocks seem to be the only rocky outcrops in the area, associated with the lithology that constitutes the Salvador-Esplanada (CSE) belt. In addition to its cultural relevance the place represents a rocky outcrop which permits access to parental material of “seas of hills” from the heart of Salvador.

Besides, there are a set of studies realized by the Federal University of Bahia – UFBA, focusing the historical/cultural aspects and from Baiana Mining Research Company – CBPM, approaching its petrological and morphological aspects, which also gives a scientific relevance to the site.

Therefore, the place has didactic potential to illustrate the process of tectonic evolution in the city of Salvador, as well as the morphodynamic processes that changes the landscape over time.